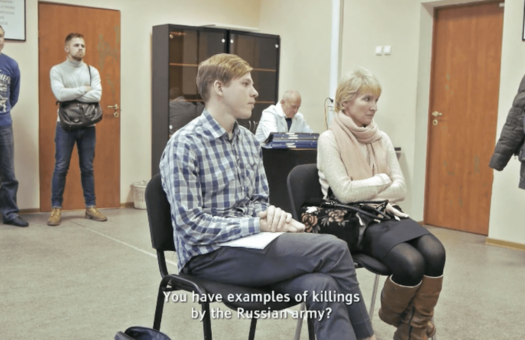 These are the stories and trials of four young men who decided that to them “pacifism” is not a swearword. But this conviction means they are swimming against the tide of a thoroughly re-militarised society which has been forging men of steel for years now. Conscientious objection is listed in section 328 of Russian criminal law.

Shy Roman is well-briefed and tries his luck with great idols like Leo Tolstoy and Albert Einstein, which only earns him a reputation as a “pseudo-Dostoyevsky”, though. With Viktor, the draft board wonder whether he’s under their jurisdiction at all (“Boy or girl?”) and then vote – much to the annoyance of some bigwigs – for alternative service. This is where the story takes an incredibly funny turn, because he is assigned to the woman veterans’ dance company “Sudarushka”. However, Lyosha, a solitaire and determined opponent of the Ukraine war, and Johnny, professional protester with a remarkable rhetorical talent, are denied this kind of kitsch ending.

And yet we may raise our hopes along with them and this film – despite the basic bitterness provoked by all this: because anyone who imagined that political repression makes us braindead and mute is taught better by Chistova’s unsubdued look behind the scenes of collective opinion and mood making.