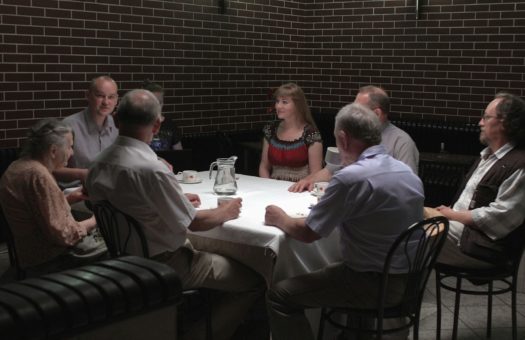 The director of the Cultural Center of Aleksandrów Kujawski decides to organize a patriotic contest of regional “patriotic attitude.” The first step consists of selecting the jury which will be composed of representatives of different circles of the local community. The members of the comittee will include: the local mayor, a priest, a poetress, a apainter and a war veteran. There will be no formal constraints and the contestants will have to show creativity in chosing the form through which they feel their patriotsm transpires best. Together with the members of the committe we follow the selection process, the official opening and behind-the-scenes debates.

Aleksandrów Kujawski is a small town in Northern Poland. In XIX century, the times of the partition of Poland, it was the border town between two empires: Prussia and Russia with an ethnicly diversified community. Nowdays the city is entirely Polish with almost no minorities. If we were to definine what words “patriotic” and “Polish” mean this is where we need to start our adventure.

It was nominated for the Cinema Eye Awards Awards in 2017.